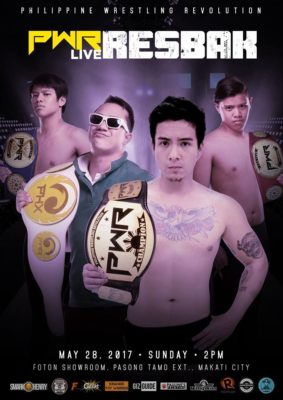 After PWR’s successful third annual Wrevolution X, the premiere Filipino professional wrestling brand hits back hard with its return-to-Makati show entitled PWR LIVE: RESBAK. Philippine Wrestling Revolution returns to the city where it all started for the first time in 2017 to bring its fans nothing but the best and most exciting Filipino pro-wrestling in the country. Don’t believe us? Check out the stacked match card set for May 28th, 2PM, at the Foton Showroom in Pasong Tamo Extension, Makati City. Walang atrasan. Resbakan na!

Chris Panzer won it all (at long last) during last month’s show of shows as he finally took PWR’s top prize from the self-proclaimed “Wrestling Lord and Savior” John Sebastian. It was a hard fought match, packed with lots of action and off-the-scaffolding frog splashes and how can we forget about that huge 10-foot ladder finish? Deserving as Panzer was to have won the PWR Title, Sebastian still has a rematch clause he can use to regain his precious championship. And at PWR LIVE: Resbak, the two men shall slug it out once more in a 2 out of 3 falls match for the PWR Championship to end this once and for all.

Fan favorite The Network downline Chino Guinto has cemented his place as a singles competitor when he won the Philippine Hybrid X Championship last month at Wrevolution X against 3 other competitors in former title-holder Peter Versoza, and contenders SANDATA and Ralph Imabayashi. The match that was set to be sheer in-ring chaos was won by none other than “The Golden Boy” who proved hungrier for the gold. But it was a bittersweet title win for the Network downline as his celebration gets abruptly cut by none other than James “Idol” Martinez himself, accompanied by fellow-downline Alexander Belmonte III, who tok the PHX Championship belt from him. Albeit Chino got the belt back after some legal threats, with his greedy and obviously jealous Network comrades breathing down his neck, will Chino Guinto be in top fighting mode come PWR LIVE: Resbak as he goes against Peter Versoza once again for his PHX Championship rematch?

This has got to be PWR’s biggest All Out War to date. To the unfamiliar, an All Out War match has no count-outs, no disqualifications, and no holds barred. Basically, anything goes. Tables, chairs, ladders, hardware tools, chains, kendo sticks, you name it! And to those familiar with All Out War matches, you know you’ll love this one as the Fighters 4 Hire (Miguel Rosales and Joey Bax) take on Deadly Sinns (Mike Madrigal and Vlad Sinnsyk) in an epic showdown that will literally tear the roof off the Foton Showroom at PWR LIVE: Resbak. This match was arranged for by PWR General Manager Mr. Sy after the two teams had broken into a backstage brawl following the PWR Tag Team Tournament Final at Wrevolution X. We can only imagine just how badly they want to get their hands (and weapons) on each other!

Jake De Leon has just come from a huge win against the world class Fil-Canadian wrestler Billy Suede from last month’s Wrevolution X. He represented PWR in a match that legitimized Filipino pro-wrestling as one to watch out for by the rest of the world. But not everyone seems to be impressed with the Bacolod-bred, Inasal-fed Senyorito’s huge accomplishment. Ralph Imabayashi, a former PWR Champion himself, has been clawing his way back up the PWR ranks. But after failing to clinch the PHX Championship during his last outing, frustration has caught up with him. And now he is on a mission to prove to everyone that he is the best pure wrestler not only in PWR but in the entire country… and what better way to do that than by going up against Jake De Leon. With Rederick Mahaba at ringside to make sure no outside interference occurs in this match, this is sure to become a classic. 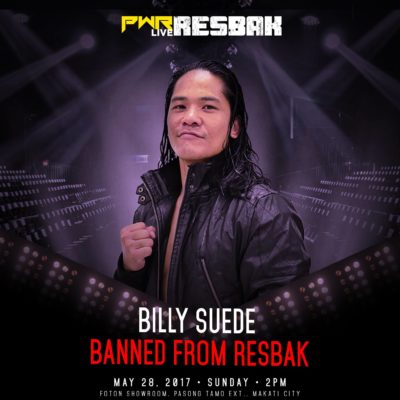 Beautiful Billy Suede is officially banned from PWR LIVE: Resbak as a response to his assault of PWR General Manager Mr. Sy – PWR yesterday at the PWR training facility. All those in attendance this Sunday at the Foton Showroom are advised to report to PWR personnel any sighting of Mr. Suede in the premises. Thank you.

What a year it has been for The YOLO Twins, Yohann and Logan Ollores. Win after win after win, they finally found themselves at the pinnacle of their tag team careers in PWR after being crowned its first ever Tag Team Champions. The title win, as we all know, was partly thanks to the “Social Media Sinister” Ken Warren who has been exhibiting a vested interest in the twins successes. The yet-to-be-named trio of the Olloreses and Warren even threw their weight around PWR a few weeks ago as they hacked into the PWR social media accounts and caused all sorts of trouble. And their ultimate act of celebration: the launch of The YOLO Twins’ inaugural R&C Show (the R and the C stand for Rich and Cool respectively) with Ken Warren as the first-ever guest at PWR LIVE: Resbak.

(NOTE: The PWR Board would like the public to know that The YOLO Twins and Ken Warren have yet to face the consequences of their recent hacking of PWR’s social media accounts. But due to a threat to sue the company, the Board has allowed the three persons involved to proceed with the pilot R&C Show and further celebrations to avoid any more conflict among the parties involved.)

HERE COMES A NEW CHALLENGER! From Long Beach, California, representing Shizuoka, Japan, Koto Hiro makes his way to Philippine Wrestling Revolution and will be going up against our very own “Social Media Sinister” Ken Warren – PWR in an first-time international matchup!

PWR Tag Team Champions The YOLO Twins will be defending their titles for the first time ever against Punk Dolls (Martivo – PWR + Robynn – PWR) at PWR LIVE: Resbak!

That’s not all, Revo-nation! We’ve got a lot more in store for you:

Earlybird and Barkada Bundle tickets are available at The Appraisery, Kramer: Toy Warden, Wingman, and Pauline’s Printing. You may also order tickets online by sending Philippine Wrestling Revolution a Facebook message or an e-mail at [email protected].
TICKET PRICES:

Don’t forget to follow @pwrofficial on Twitter and Instagram and visit pwrcentral.com for everything PWR. Use the hashtags #PWRLIVE and #RESBAK when you talk about us on social media. Kita-kits!

Jack of All Trades, Master of None,
I'll write about anything under the sun.
Anime, Games, Comics, or Food,
I'll give it a looksie, as long as it's good.

Jack of All Trades, Master of None, I'll write about anything under the sun. Anime, Games, Comics, or Food, I'll give it a looksie, as long as it's good.