Gaku Space was more than just the voice actor of Genji Shimada. He was also the man who gave life to Gouki in the live action series, “Street Fighter: Assassin’s Fist.” Gaku Space’s background in martial arts made him a good fit for the man who would become the fearsome Akuma.

We were also let in on a tiny secret: he enjoyed the Gouki role as it required lots of punching and less fancy kicking. There was a lot of Taekwondo training, but without any of the crazy kicks. Just focused on the simple middle and lows. Gaku Space preferred using weapons. This led him to learn more about Kali after his stint with Street Fighter. He likened kali to his native kendo, since they both utilized handheld weapons. Hollywood sought after kali after it’s rise in popularity thanks to Bourne-style action films. Kali was now a sought after martial arts and Gaku Space spent some time teaching it as well. 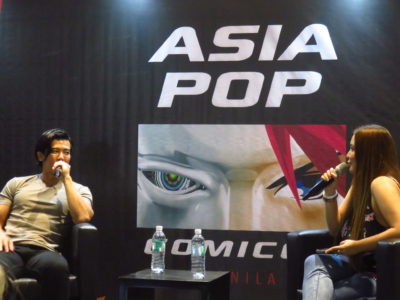 Gaku Space wasn’t always an actor. He once played baseball, following his father’s footsteps who was a member of the Tokyo Giants. After stopping playing baseball after high school, he spent most his college life watching movies. It was Denzel Washington that opened Gaku Space’s eyes to the potential of acting. He was flabbergasted that the same person can be totally different characters in different movies. Denzel opened the doors for more opportunities for black actors. Gaku Space wanted to do the same for Asian actors in the US. He moved to the US, graduated from university, and moved to the City of Angels, Los Angeles.

Gaku Space also looked up to talented actor Togo Igawa, who was a forerunner in acting for Asian actors in the United Kingdom. When Mr. Igawa first arrived in London, there were only two

actors of Asian descent. Now, there might have been a few thousand acting on TV, movies, and theaters. Fate drove Gaku Space towards Mr. Igawa, as the ground-breaking thespian played Gouki’s master in Street Fighter: Assassin’s Fist. Gaku Space was glad that there were more prominent Asian Americans on TV and movies. He doesn’t want the industry to look down on actors of Asian descent anymore.   He aimed to be a pioneer for Asian-borne actors to try their luck in the USA. When he first came to America, he knew absolutely no English. With a lot effort, he eventually got his green card. “Find something you’re good at, one or two things, then you’ll make it. “

As a voice actor, life was a little different for Gaku Space.  Body type was definitely less of a factor but he had to work hard at reducing his accent. There were fewer limitations since there was no camera. Many scripts were more like guidelines. He was given lines and their backgrounds and then he’d create the rest in his head. He wouldn’t mind accepting more voice acting roles but it’s really hard to beat a role as global as Genji Shimada of Overwatch.

DON’T MISS:  APCC 2017 Post-Mortem: The Ups, the Downs, and Everything in Between

At the moment, he focused more on plying the convention circuit outside the USA. Apparently, there was a stigma for actors who go to a lot of conventions. They were considered to be only suitable for these relatively small time roles. For now, Gaku Space was looking forward to traveling to Kuwait and Turkey, alongside Lucio voice actor, Johnny Cruz. For now, Gaku Space was happy with this arrangement, getting to travel the world and do the job he loved. His message for all aspiring voice actors was simple.

“Accept who you are and be confident.”

Jack of All Trades, Master of None,
I'll write about anything under the sun.
Anime, Games, Comics, or Food,
I'll give it a looksie, as long as it's good.

Jack of All Trades, Master of None, I'll write about anything under the sun. Anime, Games, Comics, or Food, I'll give it a looksie, as long as it's good.

Say Hello to the Meizu Pro 7!
Our friends over at Meizu Philippines and Hellotronics invited us over…